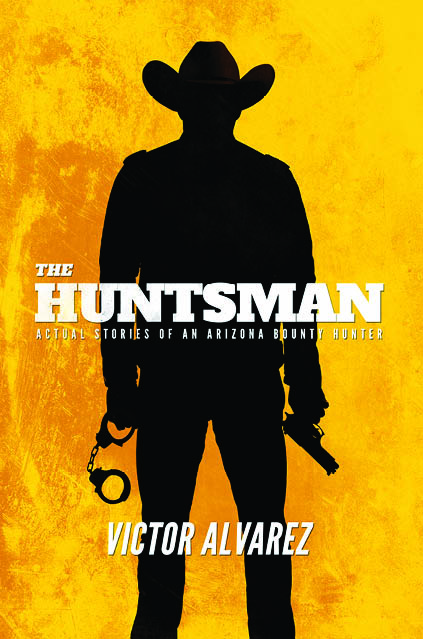 “Plan for the worst, hope for the best! That always sounded like such a sensible and cool philosophy, until it turns out for the worst…! ” Say’s Arizona Bounty Hunter Victor Alvarez – The Huntsman – a tough minded Puerto Rican, Ex-Army CID Agent, on the hunt for bail bond “Jumpers.”

Victor Alvarez’s stories tell of his time as a modern day bounty hunter or as they are known today as “Bail Agents,” who has to bring in his Bail Jumpers alive, not like the old days of the wanted posters that hang up in front of the Sheriff’s office which read Wanted Dead or Alive.

Get this Exciting New Novel!

“Plan for the worst, hope for the best! That always sounded like such a sensible and cool philosophy, until it turns out for the worst…! ” Say’s Arizona Bounty Hunter Victor Alvarez – The Huntsman – a tough minded Puerto Rican, Ex-Army CID Agent, on the hunt for bail bond “Jumpers.”

EXCERPT FROM THE HUNTSMAN

. . .I jumped down the steps and ran to the back and saw him hoofing it away from the trailer. It was pitch black and I couldn’t make out too much. Then I saw him running between some trailers. I gave chase. . . He kept on running and was rapidly outdistancing me. I was going to lose him! . . .I saw him again about twenty feet ahead of me, just as he stopped by the corner of a trailer. . . . He turned in my direction, yelling something at me which I couldn’t make out. Then he drew a gun and fired a shot in my direction. I fell to the ground and just as I did I heard the bullet whistling over my head. I was just starting to track him with my gun, when he fired a second shot which flew just wide of my right shoulder has I rolled to my left side. “Holy Christ!” I said. ”That was too close. . .”

This book describes the adventures of one of my best friends Retired Staff Sergeant (SSG) Victor Alvarez.  A highly successful and well known U.S. Army Criminal Investigator (CID Agent) in his own right, and a most effective Arizona Private Investigator and Bounty Hunter. I first met SSG Alvarez when I was a young Company Commander of the famed 545th Military Police Company, the old horse Cavalry MP’s of the First Cavalry Division in the ‘Nam back in 1969.  He was a young investigator who showed great promise and guts, and always got the job done at any cost.  A well rounded individual with high moral values that set him apart from most Soldiers and Investigator’s I have known.

Victor Alvarez is a true American legend. If I did not know him personally, this book would be considered tall tales or Hollywood imagination. Native Americans might say that Victor is protected by the Great Bear Spirit, as his life experiences would tell you that he should not have survived any given day to tell his stories.

Victor takes you into his world; growing up in the tough gang life of Spanish Harlem, the Vietnam War and a decorated career as a C.I.D. agent in the U.S. Army, to chasing down some of the nation’s nastiest criminals by himself with just his wits and bare hands.

This man has been forged by grit and training that is no longer attainable. Victor’s stories as a bounty hunter puts you right there in the action with him; whether it be sipping cold coffee on surveillance or kicking in a bad guy’s teeth. These stories are captivating, but they came with great sacrifice. Above all, long ago, Victor Alvarez chose to live a life of honor. He still gives his all to serve even today. Read his book, you won’t regret it.

“Plan for the worst, hope for the best! That always sounded like such a sensible and cool philosophy, until it turns out for the worst…! ” Say’s Arizona Bounty Hunter Victor Alvarez – The Huntsman – a tough minded Puerto Rican, and Ex-Army CID Agent,  on the hunt for several bail bond “Jumpers.”

“Plan for the worst, hope for the best!”

Ex-military Policeman and retired U.S. Army Criminal Investigator (CID Agent) Victor Alvarez served a total of twenty years in the service of his country and after turning in his retirement papers, and having served two ground combat tours in the ‘Nam, he was not satisfied in the way his life was turning.  Bouncing around from job to job and not really holding on to any one for any length of time, it was better to up sticks and move. So he packed his bags, loaded up his wife and three small children and headed out to Tucson, Arizona looking for that something to spark his life once again.

It’s the late 1980’s and soon after arriving in Tucson he secured a day time job. But soon boredom seeped in and those same feelings resurfaced. Then he found the answer to his problems, he applied for his credentials as an Arizona State Private Investigator. Now here was something right up his alley. During his time as a CID Agent he investigated crimes of passion, homicides and suicides cases to name a few. So being a PI wouldn’t be that different. Within a few months of obtaining his PI credentials he landed an assignment for a lawyer – a divorce case. That one ended with gun shots being fired his way after getting all the photographs he needed! And it didn’t worry him none that the one firing the gun was a homicide detective!

With that case and several others, two of the most reputable Bail Bonds agents in Tucson, were on his short list of clients. Montiel and Triple A Bail Bonds requested his help in tracking and bringing back to jail numerous clients who have Jump Bail. And they were able to pay him ten percent of the face amount of the bond to get it done! Alvarez could now set his own time and pick his own cases!

With Mexican drug enforcers out to put him six feet under and Neo-Nazis skinheads wanting to have his blood, the Huntsman, as most of his friends in the DEA nicknamed him, proved he was more than capable when he came face to face with some of Tucson’s deadliest criminal elements.

But that sense of adventure was not shared by Alvarez’s wife. She was quite unhappy with his job but tolerated it when he brought in his paycheck. Arguments ensued and the more she argued for him to quit, the more cases he took in, which left his marriage on shaky grounds.